The world of SyFy Channel shark movies is not for everyone. For those of us likeminded adventurers who regularly swim in these waters – sorry, couldn’t help it – we know what we are getting into, don’t we? 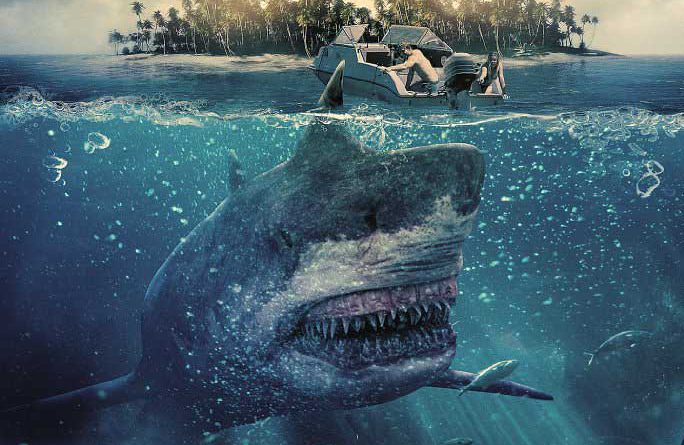 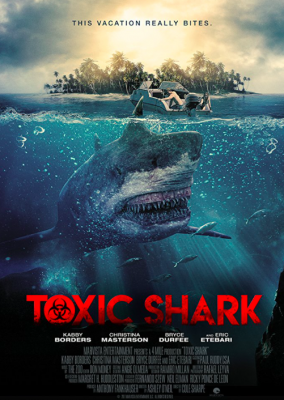 What happens when you combine a Puerto Rican island singles resort for toned hotties with a man-eating shark?  What if said shark is also capable of projectile spitting a stream of poisonous, green sludge at its would-be victims?  And what if the same horrid toxins that infected the shark can transform people into zombies?  Jiminy Christmas, The Doctor has no idea, but you can be certain that in the name of science I aims to find out.

When the brain surgeons in charge of programming for the SyFy Channel released Sharknado Ten: Piece of Shit – I may have the title wrong – they decided to produce their own version of Shark Week by releasing a veritable wave of other new shark movies at the same time.  There are worse strategies, and this one likely would have fooled The Doctor, but I was away on some silly business or other when the movies aired in the summer of 2017.  However, I was looking for a movie to watch and review for the Tuesday Night Cigar Club, so I grabbed the Roku remote and went spelunking.  With the summer heat waves shimmering on the horizon and a fresh gin and tonic nearby, it was perfect timing for Toxic Shark.

We begin our voyage with some really bad ADR in the film’s opening scene.  For those not in the know, ADR stands for Additional Dialogue Recording, and it’s what happens when poor sound quality on the day of the shoot forces the actor or actress to come into a sound studio after principal photography has completed and record their lines.  The editor then has the unenviable task of trying to match the recorded dialogue with the performer’s lips.  As one might imagine, unfavorable results are often difficult to avoid.  Not only did I immediately recognize the employ of bad ADR, I also doubted whether it was even the same actor and actress.  Thankfully this problem cleared up rather quickly, and it was more amusing than annoying, but I felt that it was worth mentioning.  It also serves as a reminder that you are watching a SyFy film.  And the answer is Yes, I am jealous that I do not have a semi-lucrative side career starring in these things.  Your friendly neighborhood Doctor is actually a hell of an actor, I’ve been told. Maybe someday… 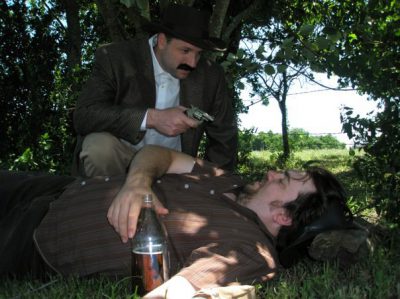 A still image of The Doctor in action taken from the short film “There Will Be Steels” now available for viewing on the TNCC YouTube page!

Shot on location in Puerto Rico, the HD presentation of Toxic Shark is really crisp, with beautiful shots of the crashing surf, the large rock formations on the beach, and the wobbly booties!  Sorry, I couldn’t help myself.  Skin is the lynchpin of Toxic Shark.  All of the principal male actors strut about shirtless to show off their washboard abs and all of the ladies are curvaceous beauties in various stages of bikini.  We are able to buy into the fact that everyone in the movie is physically attractive because the name of the resort locale is actually “Bodies by Reese: Singles Fitness Resort”. 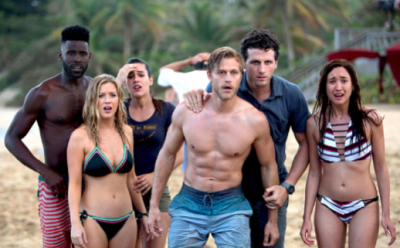 The normal state of dress for the performers in Toxic Shark

It turns out that All-American twenty-something blondes Eden (Kabby Borders) and Sam (Bryce Durfee) have recently broken up with each other back in the states but their respective groups of friends, unbeknownst to each other, have dragged them to the EXACT SAME ISLAND SINGLES FITNESS RESORT for some rebound fun in the sun! What are the odds on that? And who really cares? Not The Doctor, and when one of Eden’s friends tells her that “the best way to get over a guy is to get under another one” I realized that it was best to throw any sound reasoning out the laboratory window. It’s only a matter of time before Eden and Sam literally bump into each other. When they are paired up as partners to perform ball squats in a beachfront workout, the romantic tension can be cut with a knife! If all of this sounds strangely entertaining, that’s because it strangely is. Throw in gemstone lines such as when one of Bryce’s over-muscled pals says to the other “Is that a shirt or a sausage casing?” and you know you are in for an over-the-top good time.

Reese himself is the quintessential resort owner – an archetype that regularly appears in creature features – who may or may not be aware that the pristine waters off his coast have become contaminated with dangerous chemicals that have killed off the fish, or worse… It’s definitely worse! Do not, under any circumstances, allow yourself to get scraped and draw blood in the water, otherwise the infectious chemicals will enter your bloodstream and slowly turn you into a flesh-hungry zombie. You read that right, in addition to Toxie attacking yoga practitioners on their morning swim, a zombie element has been introduced. Is this all madness? It certainly is, but damned if I wasn’t enjoying the heck out of this goofy ride. Reese of course does not want to hear any of it, no matter how hard it is to ignore, even when an underwater telephone cable lifted directly out of the Jaws 2 plot makes its appearance. 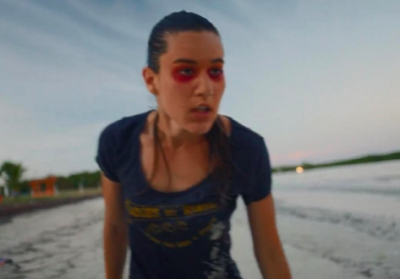 If you don’t get eaten, you might get infected and turn into a zombie. Either that or she just has a terrible rash…

At some point during the middle of Toxic Shark, the screenplay calls for the character of Eden to spend the remainder of the film’s duration clad only in a skimpy black bikini. For the sake of clarity, I will now point out that Kabby Borders delivers a good acting performance as Eden. It cannot be easy to play this material seriously and somehow bring it off, and her efforts in this regard should be acknowledged. However, Borders is also undeniably easy to look at and many of her scenes in the second half of Toxic Shark were clearly shot to emphasize her many physical attributes. Personally, I think she is hotter than the sun, but that is just my medical opinion. I realize that one has to watch what one says in today’s climate, but if I can no longer say that a beautiful, sexy woman is a beautiful, sexy woman then it really might be time for TNCC chairman Matthew Cade to finally build that Wicker Man he’s been talking about and set me ablaze. 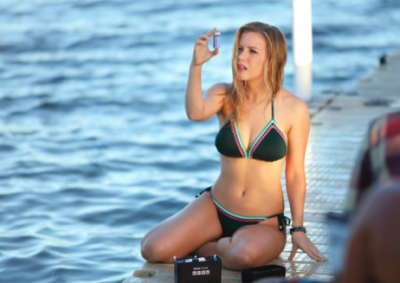 The fetching Kabby Borders as Eden in “Toxic Shark”. And is she performing a science experiment? The Doctor might be in love!

What of the shark? It is a question that always must be asked when viewing a shark movie, after all. Unfortunately, the shark in Toxic Shark is made up of fairly bad CGI, although not as bad as the literally cartoonish green vomit that it spews out. Complaining, however, is a counterproductive exercise. The world of SyFy Channel shark movies is not for everyone. For those of us likeminded adventurers who regularly swim in these waters – sorry, couldn’t help it – we know what we are getting into, don’t we? 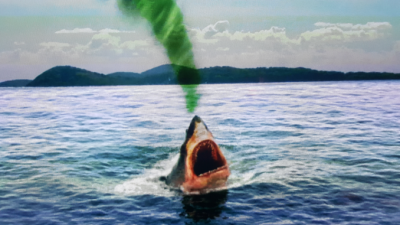 Did that CGI shark just spit out a green cyclone? Yes, yes it did.

Will any of the singles find love before dying? Will Sam and Eden put aside the “toxic” elements of their relationship and learn to focus on the positive? More importantly, will they find a way to escape the island before being eaten or succumbing to zombification? All of these questions and more will be answered, but you’ll have to plunk down the current Amazon Prime rental price of $1.99 to find out. Like a $6 cigar that is possessed of a $15 cigar’s quality, Toxic Shark is a bargain at twice the price. As always, my friends, The Doctor wishes you all a clean bill of health.