The Doctor cannot understate how good this movie looks and sounds; I couldn’t get over my awe throughout the duration of my screening... 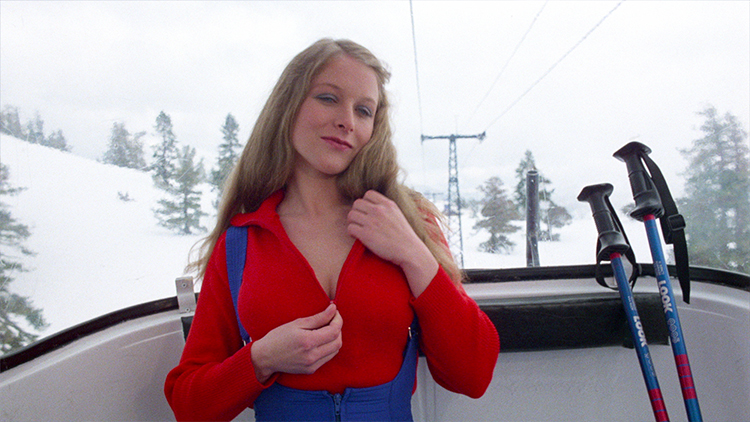 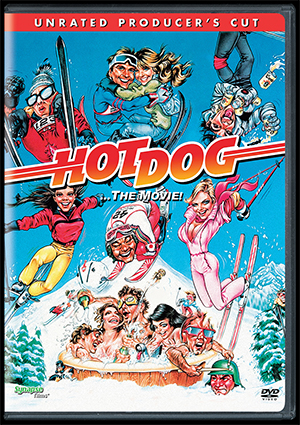 It all starts with the cover art…

Late of one winter afternoon I was conversing with TNCC chairman Matthew Cade and lamenting the fact that Hot Dog…The Movie! was no longer available for rental. In fact, I was already well aware of this inconvenience, as it hadn’t been available on any streaming service for some time, but I remained bothered nonetheless. The Tuesday Night Cigar Club performed our usual comprehensive analysis of Hot Dog on a podcast in our earlier days, so there is no need to capture the film’s details here. Suffice it to say, I have been wanting to watch it again and have been unable to wet that particular whistle for at least a couple of years. I even told Cade that a DVD of Hot Dog would fetch a tidy sum on Amazon and, in a fit of pique, I visited the web site to illustrate my point… where I was gleefully shocked to find a brand spanking new Blu-ray of Hot Dog… The Movie! Unrated Producer’s Cut available for sale. My God, the implications! This is why The Doctor gets up in the morning. The list of special features includes “New 4K restoration of the producer’s uncut version from the recently discovered original 35mm camera negative” which makes it sound as if Indiana Jones unearthed it while spelunking in an underground cave festooned with boobytraps. The back cover description informed me that the film contained “…additional nudity, sex and restored scenes.” Say no more. Grab your skis, and remember that Love Starts At The Top Of The Hill!

Never did I think the day would come, but here was Hot Dog in pristine Blu-ray high definition beauty. In other words, it looks and sounds like it was made last week, a remarkable accomplishment given that the film was released in 1984. From the snow capped mountains in the background, to the dust on the road, to the light freckles on Sunny’s (Tracy Smith) nose, to the snow flurries in front of the Siesta Motel… Hot Dog on Blu-ray is breathtaking to behold. Gone are the blurry elements associated with VHS transfers of the past. I was reminded of the first time I watched the original Children of the Corn on Blu-ray and was able to see individual spears of grass as they were trampled underfoot by a teenaged Courtney Gains. 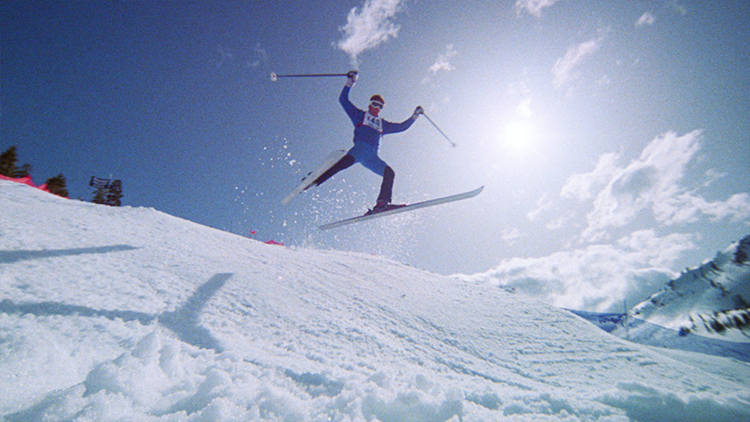 Supposedly the Producer’s Cut now includes a “new 5.1 surround mix” and while I’m not sure what precisely that means, the 80’s synthesizer-heavy score stands out as much as the scenery. Except, of course for the hairs on the swinging fur coat of Rudi Garmischt (John Patrick Refer). Or the bubbles in the glass of champagne belonging to Squaw Valley’s resident alcoholic skier Dan O’Callahan* (David Naughton). The Doctor cannot understate how good this movie looks and sounds; I couldn’t get over my awe throughout the duration of my screening. Blu-ray and high definition technology have been with us for a while, but it never ceases to amaze me and Hot Dog is a movie possessing the scenery and the music that begged for this format.

Some of the recently re-added footage obviously takes place inside the Lone Star Saloon during a wet t-shirt contest, a practice I believe has now been outlawed in most of the United States. It also appears to be taking place on “Half Price Night For Fun Loving Bearded Country Boys”. Unedited and upgraded to high definition, it might be one of the greatest four-and-a-half minute sequences in the history of moving pictures, rivaling anything from Battleship Potemkin. 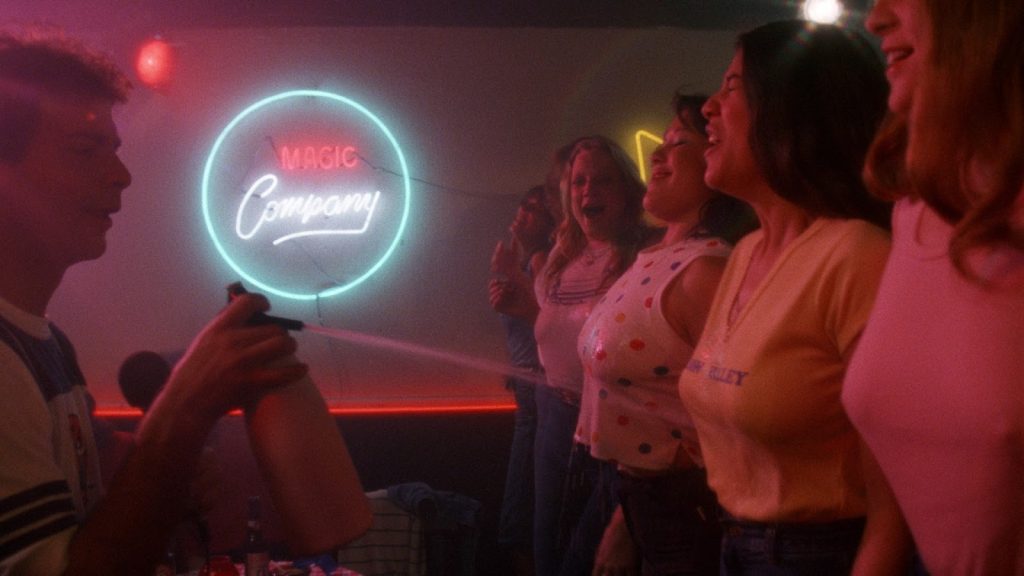 This is the sort of unapologetic fun that Hot Dog – and the 1980’s – were all about. I digress. And I might be crying.

Let’s have another word on the soundtrack. I’ve been a fan of Mitch Ryder’s “When You Were Mine” since we revisited this movie several years ago and I often tune it up on long nights. One of my other favorite sequences occurs when the good guys, led by Harkin (Patrick Hauser) and O’Callahan, scatter their way down the slopes in various stages of disarray while the song plays. This part of the film may not have any newfound footage, but it certainly looks like one of the most fun moments that any group of friends could experience in their respective lives. That it takes place in between separate afternoon bouts of drinking only furthers my theory.

Are we eventually treated to a gratuitous shot of Harkin’s ass in the moonlight? Perhaps, but I think you’ll have to purchase the Blu-ray to find out for sure. Of course, as every fan of Hot Dog knows, Shannon Tweed will soon appear and that is a woman who has never needed high definition to look fantastic. I suddenly want to listen to Duran Duran’s 80’s hit “Hungry Like The Wolf”… 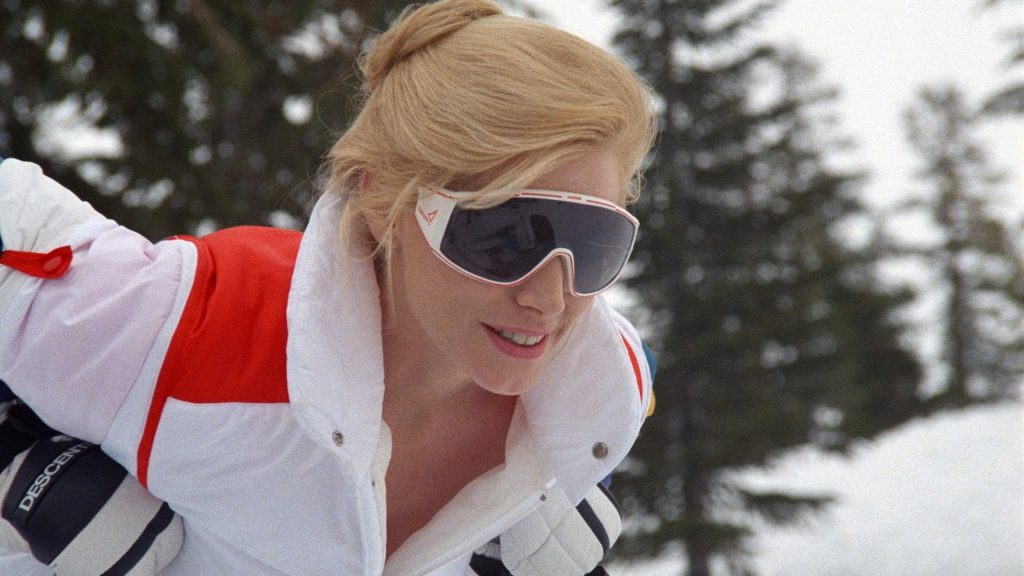 Watch the movie and you will understand why. I would never lead you wrong.

Hot Dog… The Movie! has always been a wonderful representation of 80’s movies and that monumental decade in general. The non-stop partying and hijinks, the daredevil ski action, the rocking soundtrack, and the bodacious babes adds up to a sum greater than the many joyous parts. But the recently released Blu-ray Producer’s Cut with its restored print and surround sound is nothing short of a masterpiece. I’ve never wanted more to party on the ski slopes and make the Rudi Garmischts of the world eat powder following defeat in the infamous Chinese Downhill. And don’t even get me started on that apeshit Downhill! This is well worth the purchase price if your heart is still beating. As always, good friends, The Doctor wishes you a clean bill of health. 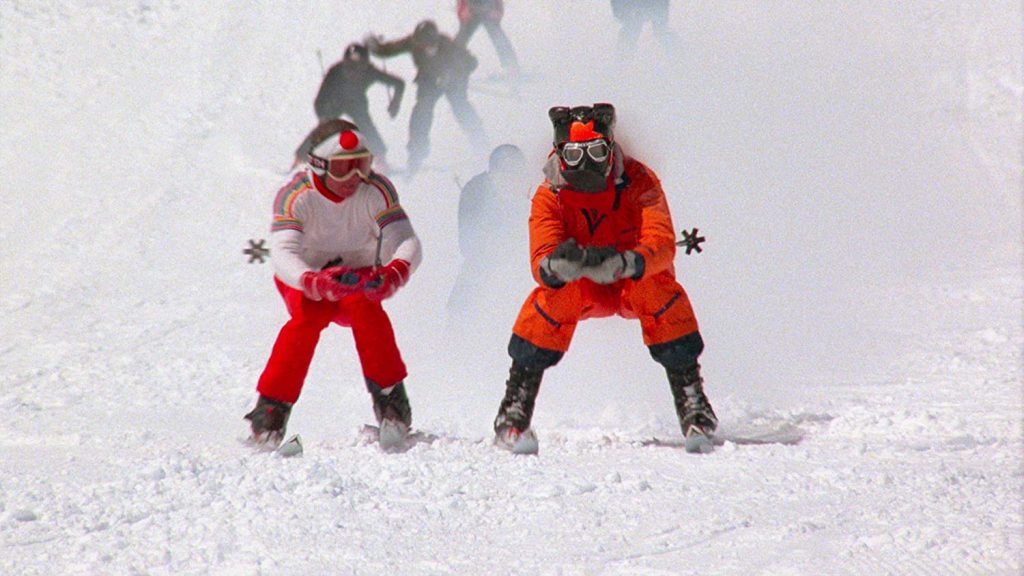 Last one to the bottom buys the next round!

* I believe Cade covered this in the TNCC podcast of Hot Dog, but it bears repeating here and I am the man to do it. Dan O’Callahan’s unabashed, non-stop, binge drinking is truly something to behold even if these scenes are not greatly enhanced by high definition. The pockets of O’Callahan’s ski jacket are filled with airplane mini liquor bottles, and he is constantly power chugging Coors beers or slamming champagne or martinis. By some set of magical powers, the bingeing never seems to affect O’Callahan’s skiing or pickle ball abilities, much less his speech patterns. Because this was the eighties, there were no repercussions for this admittedly irresponsible behavior. 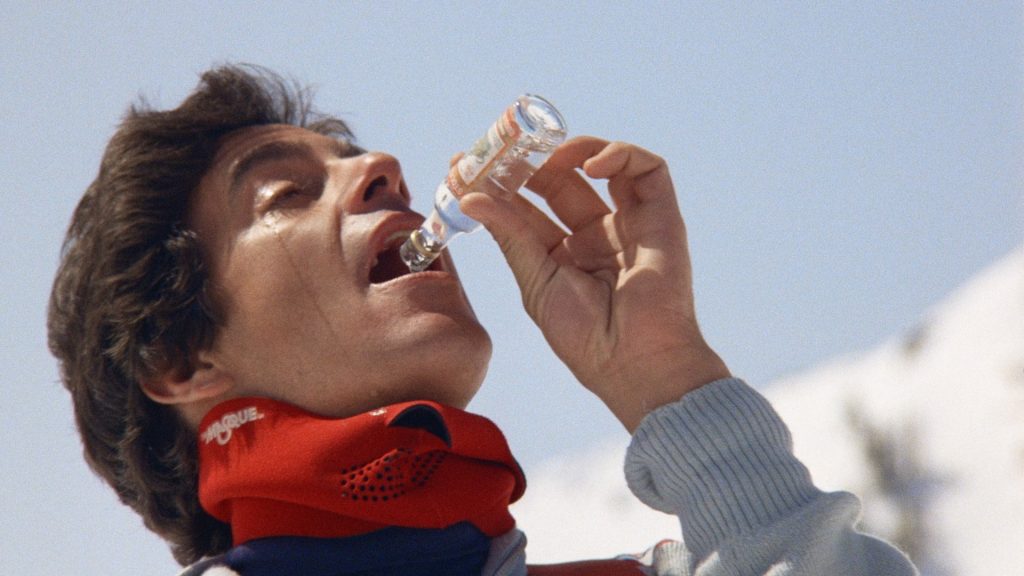 DO NOT try this at home; Dan was a professional.