Our "7th Annual Spooktastic & Booriffic Drunken March To Halloween” continues full speed ahead! Or something like that... 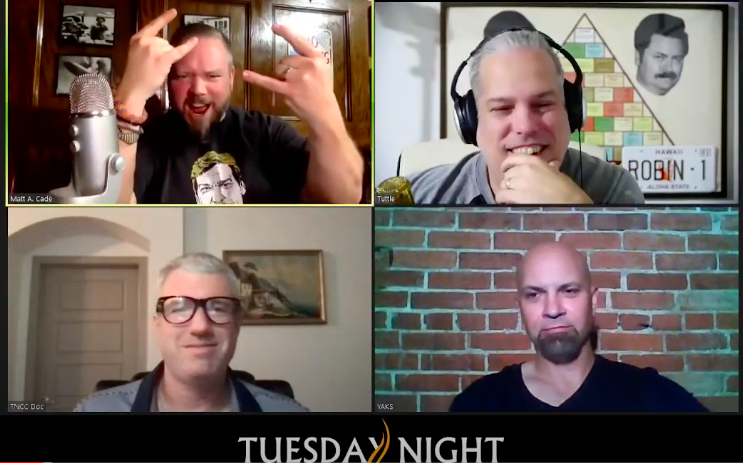 Well at least one of us showed up ready to rock-n-fuckin-roll!

Welcome everyone to The Tuesday Night Cigar Club Episode 146! Tonight our “7th Annual Spooktastic & Booriffic Drunken March To Halloween” continues full speed ahead and I have a feeling that you’re gonna have some fun with this one. Y’all ready to rock? I thought you might be, so click the links at the bottom of the page and JOIN THE PARTY!!!

THE CIGAR – ROSE OF SHARON DESERT ROSE by SOUTHERN DRAW

Size: 6 x 44 (lonsdale)
Wrapper: Ecuadorian Connecticut
Binder: Nicaraguan Habano
Filler: Dominican Republic (Piloto Cubano) and Honduras (Corojo 99)
Price: $9.99 (And please remember when purchasing some tasty Southern Draw smokes ~ these were kindly submitted to us for review by Southern Draw ~ or other fine premium cigars from FamousSmokeShop.com to use your new favorite promo code TNCC20 at checkout where it will knock $20 off your purchase of $100 or more!)

This cigar made its debut at the 2019 IPCPR (now PCA) trade show. It is a new expression of the Desert Rose (which took the #3 spot on our Top Ten Cigar list for 2019) and that initial blend of the Desert Rose was a spin on Southern Draw’s original Rose Of Sharon cigar (which was our #1 rated cigar of 2017!). So obviously we are fans of this line, the Rose Of Sharon is a stogie that I smoke A LOT of, it’s one of my favorite all-time Connecticut cigars, so I was very excited to set this attractive lonsdale on fire and see what’s what. 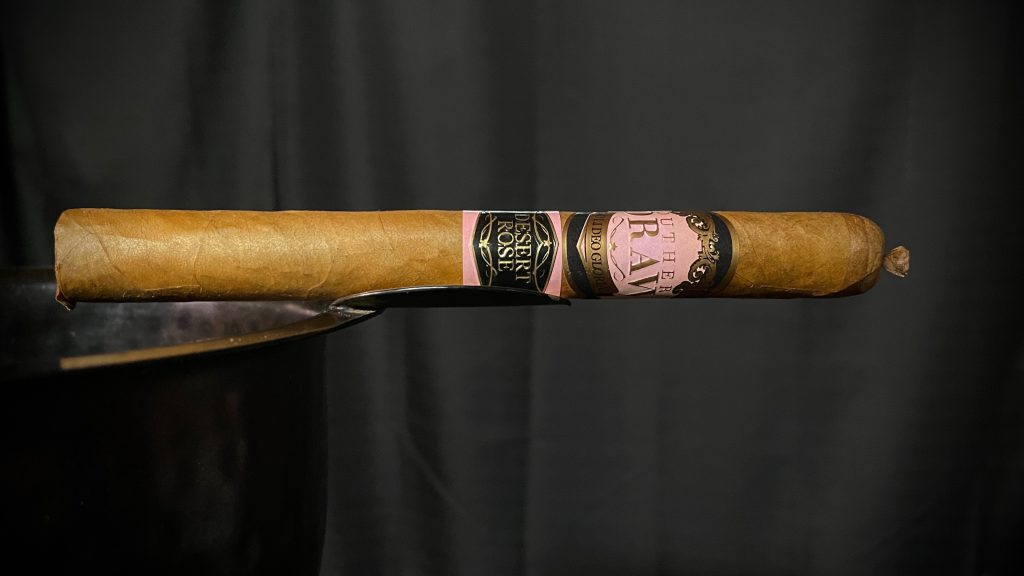 I’ll say it here once again in regards to the bands utilized on all of the variations of the Rose of Sharon, pink and black contrast against each other so damn well. The Desert Rose lonsdale features a beautiful, silky wrapper featuring a twisted cap, a closed foot, and a pleasant aroma of both graham cracker and hay with just a touch of cocoa powder. First impressions are of a crisp white pepper spice through the nose with notes of earth, leather, and cedar via the draw. Tut described the earthy flavor as “bright earth” which is a descriptive that we had never heard before and he reasoned that it was more accurate than describing what he was experiencing as “muddy dank swamp”. Makes sense. 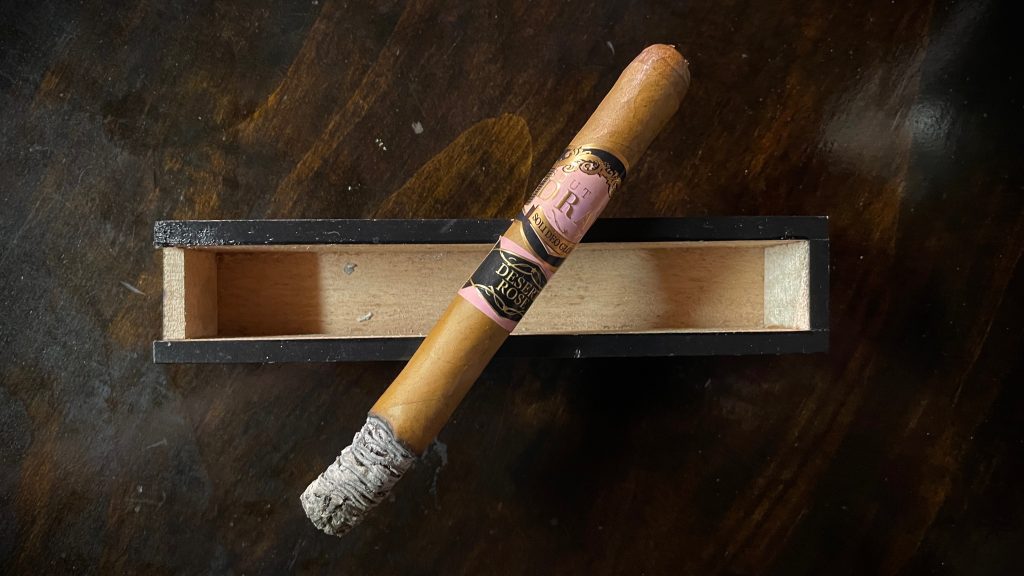 As the smoking experience continues, a vanilla note appears on the backend of the retrohale and it dances perfectly with the leather, cedar, and “bright earth” still both very discernible on the draw. That vanilla is a signature characteristic of every variation of the Rose Of Sharon to date, so I was waiting for it and the Desert Rose lonsdale didn’t disappoint. Oh and it soon gets even better, as a Nilla Wafer cookie flavor begins to develop on the draw at around the one inch mark. These flavors all hold steady until the very end. And while the pepper strength drops down a notch in the middle third it gloriously returns to puff its chest out once again after the primary band is removed. Construction is flawless from start to finish with an impressive burn, perfect draw, and copious smoke production that produced a highly enjoyable aroma. 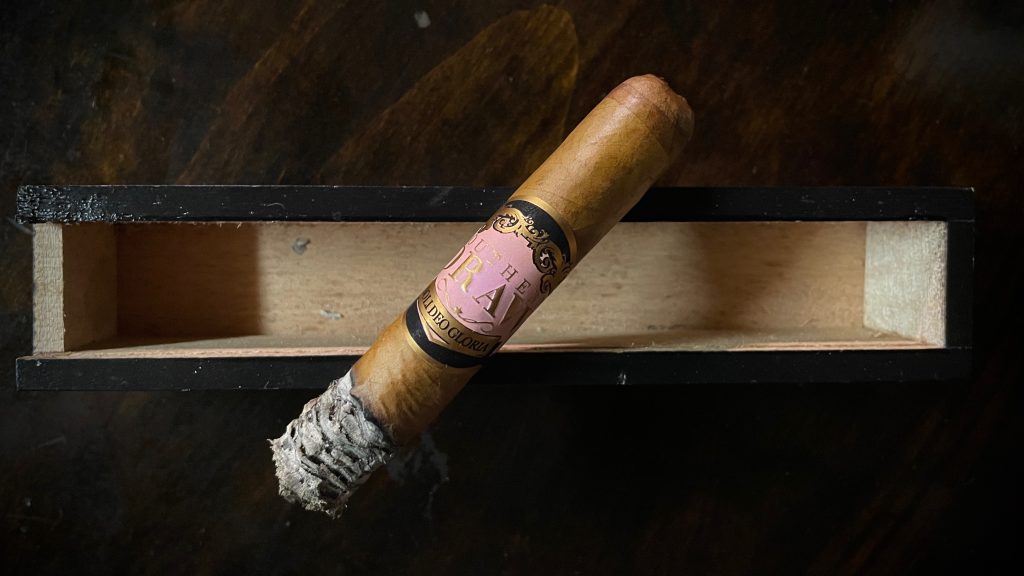 The Desert Rose lonsdale is an incredibly balanced and flavorful offering from Southern Draw and we all agreed that this vitola showcases the blend perfectly. Tonight’s cigar highlights what works best in both the original delicate Rose Of Sharon and the subsequent, bolder Desert Rose. This line has become synonymous with us as far as it being a true standout Connecticut cigar in an industry full of boring Connecticut cigars, and it consistently leaves you with a truly beautiful finish that lingers for a small eternity on your palate. So, hopefully obviously, we feel highly confident in encouraging you to go out and pick up a box of these beauties ASAP as you shall not be disappointed! 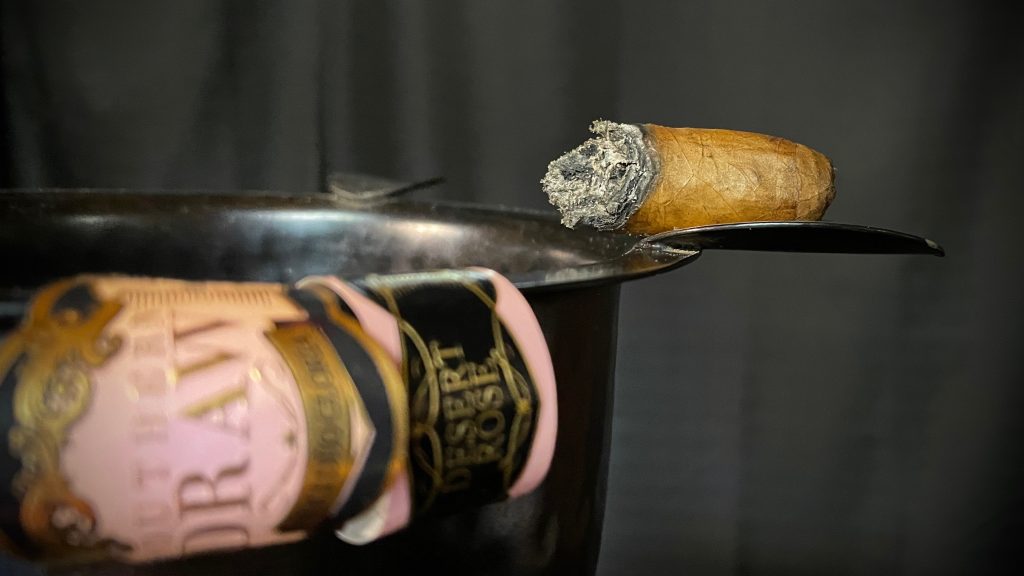 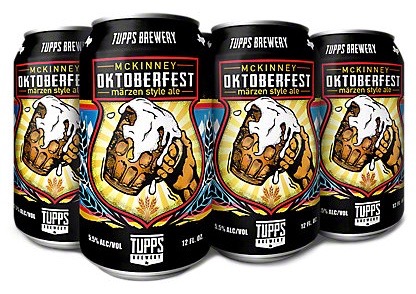 As have been the rules for seven years now, any Oktoberfest beer is always welcome on the show during the course of our March To Halloween and, fortunately, Tut selected a winner this evening. This Märzen style lager clocks in at 5.5% and 20 IBUs and Tut found it to be extremely crisp and a bit lighter than most Oktoberfests we’ve featured on the show previously and it paired nicely with tonight’s stogie. And by drinking this tasty beer out of his beautiful OBriens Oktoberfest stein, Tut gets a half point added to his overall pairing score!
TUT’S PAIRING GRADE = C+ 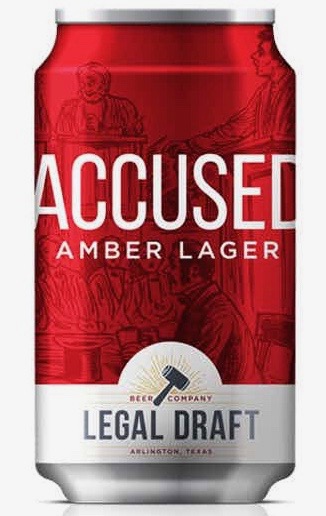 Also coming in at 5.5% and 20 IBUs, the Vienna style Accused Amber Lager features a malty aroma off the pour and there is a slight sweetness to its overall profile that The Doctor enjoyed quite a bit. And while he is currently unable to smoke cigars along with us, Doc felt that this beer would not overwhelm any cigar whatsoever. The Doctor justified this pairing by mentioning that many heavy metal bands in the 1980s were accused of hiding subliminal satanic messages on their records when played backwards and because we are indeed featuring a heavy metal movie tonight that connection, as limp and sad as it may be, will be reflected in his score below…
THE DOCTOR’S PAIRING GRADE = D+ 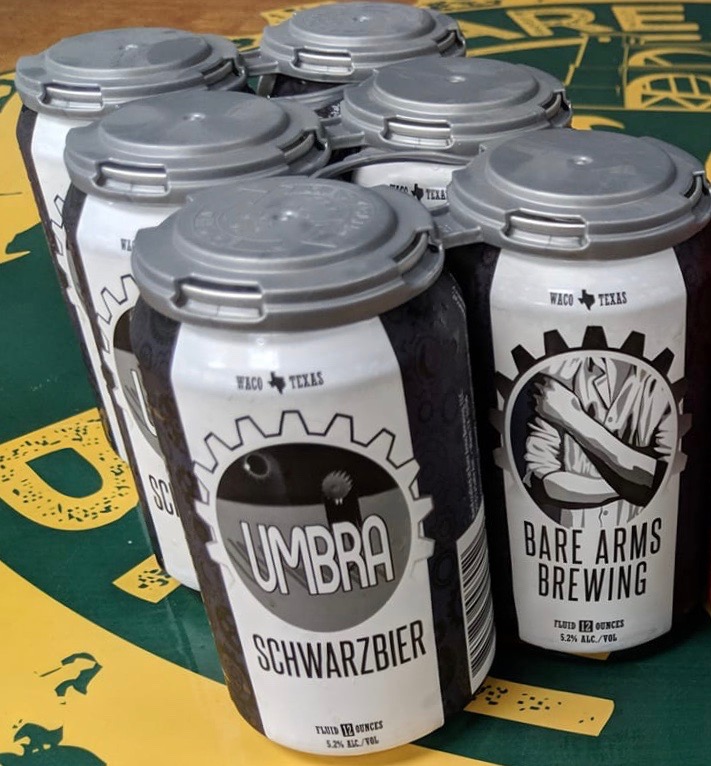 This German style 5.2% Schwarzbier pours ultra black and showcases some tasty roasted malts and all of these things led Yaks to be surprised by just how light the overall profile of the beer was. And, yes, this BLACK beer is being paired with our film BLACK Roses so there you go!
YAK BOY’S PAIRING SCORE = D-

I’m a big fan of this delicious beer! At 6.8% and 62 IBUs this single malt, single hop IPA has a gorgeous pour, enticing aroma, and it is so damn smooth that this IPA has paired spectacularly with every cigar I’ve ever saddled up with it. And I’ll offer this unsolicited opinion as well, the Yellow Rose is vastly superior in bottle form than served on draft. I don’t know why that is the case but it absolutely is. The Yellow ROSE paired magnificently with the Desert ROSE cigar as well as our movie Black ROSES. That’s a pairing trifecta that truly only a world-renowned pairing expert could dream of pulling off but per the norm I didn’t just dream it, folks, I did it. Next time you’re feeling down in the dumps, just remember that the world is 4.5 billion years old and you’re managing to exist at the same time as me, a man who pairs beers, cigars, and films like no other sentient creature has in all of history. Lucky you!
CADE’S PAIRING GRADE = A++ 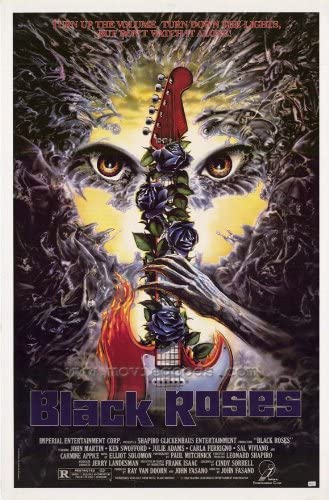 They sure as shit don’t make em like they used to, boys and ghouls! I love two things about this flick in particular and, in my opinion, there’s A LOT here to love when soaking in Black Roses:

1.) This felt a lot like my favorite film of all time Halloween 3: Season Of The Witch and I don’t see many movies that remind me of that masterpiece. You have the mustached Miller High Life drinking hero, the nihilistic bummer of an ending, a very charismatic bad guy, and you also have a crazy global threat – initially orchestrated specifically towards targeting America’s vulnerable youth – and no one is interested in listening to our hunky English teacher protagonist Matthew Moorhouse because of how crazy it all sounds. 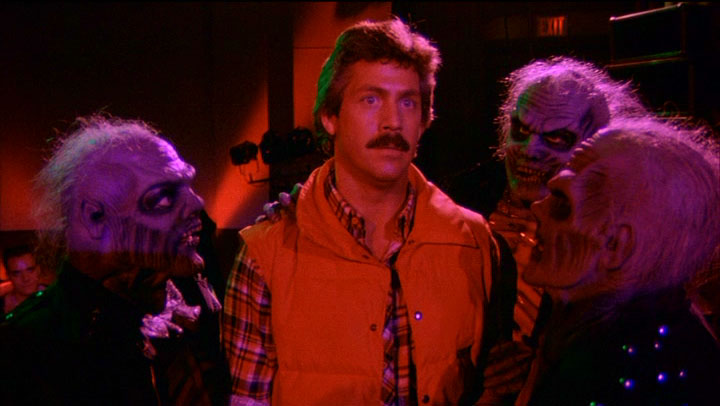 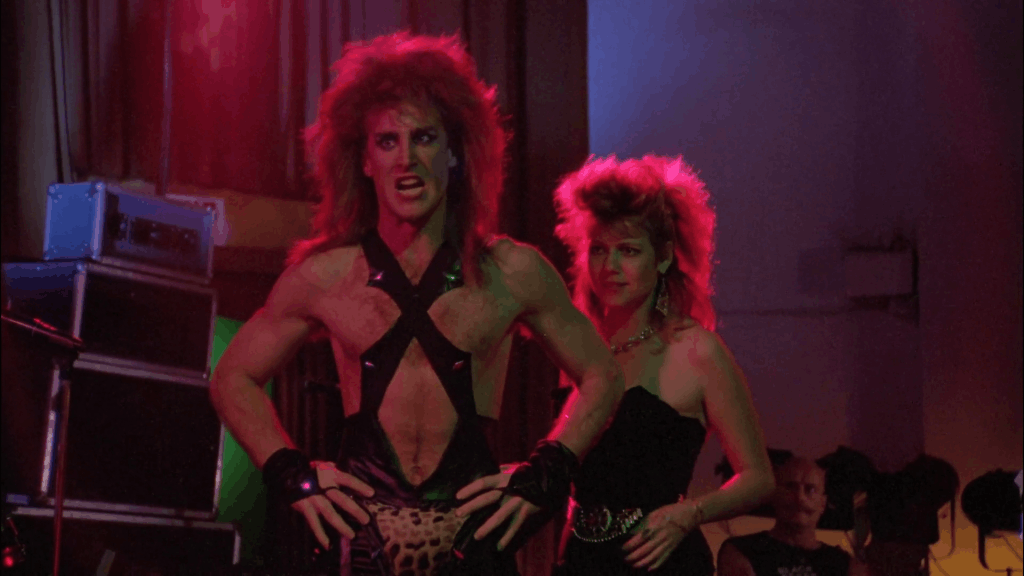 2.) I also loved how this film took the premise that what some close-minded parents feared all along from heavy metal in the 1980s was not only true but WAY FUCKING WORSE. The movie would have certainly made Tipper Gore’s head explode and I like that Black Roses just went for it and went for it big in every way possible. 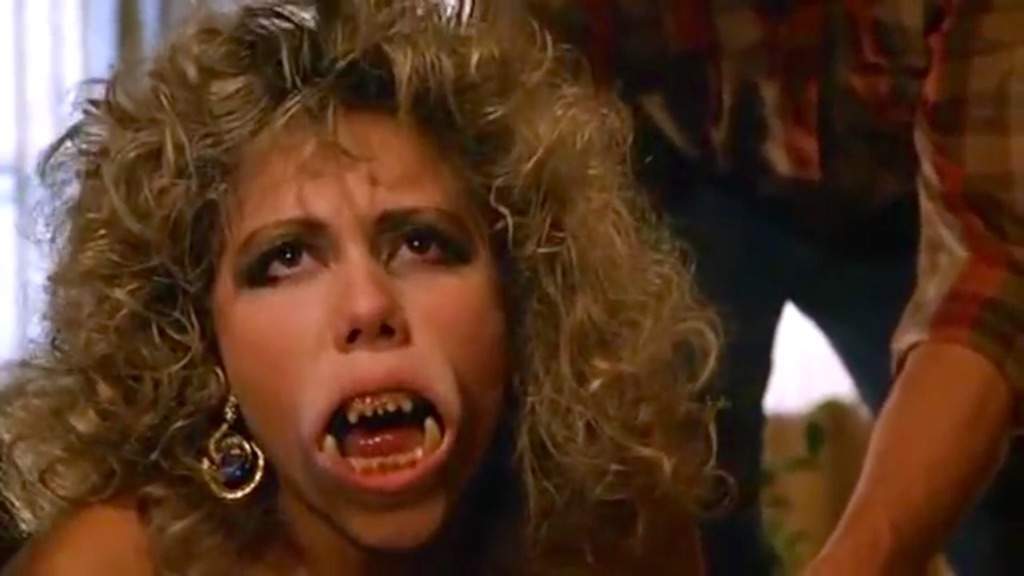 She may suck but this movie absolutely didn’t…

We have a blast dissecting this cinematic time capsule of late 80’s heavy metal horror and I’m positive you’ll laugh, love, and learn right along with us. So throw up your devil horns, click on the links below, and let’s do this! 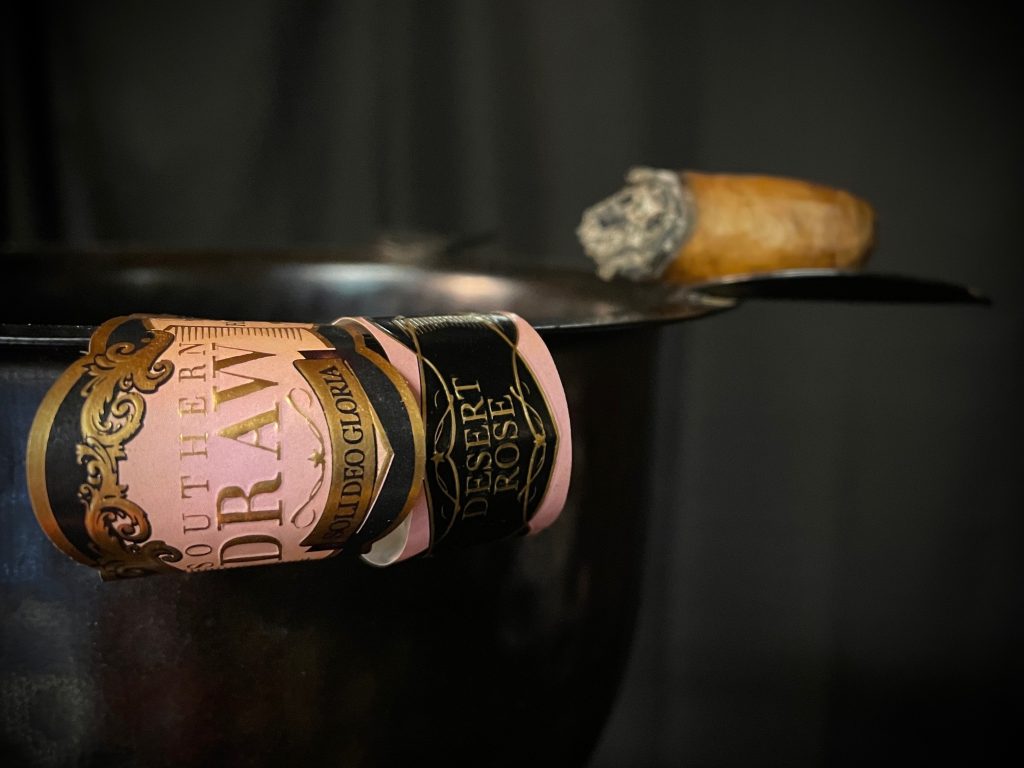 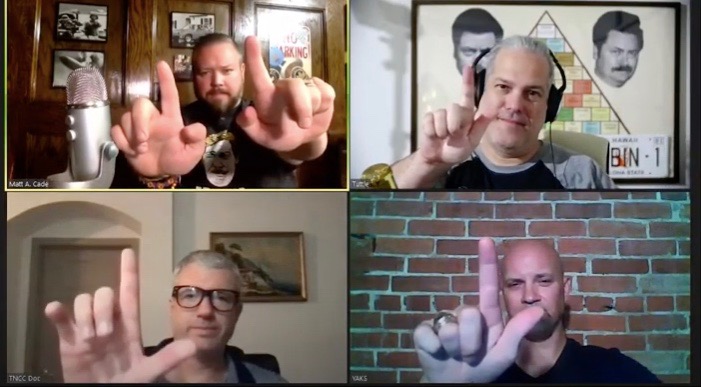