Liza is stunningly attractive, and the day that I can’t say that is the day I stop drinking tankards of ale while watching crocodile movies. In other words, don’t hold your breath...

If Grade-B creature features have taught us one thing, it is that the demonic monster from the original film has laid an egg somewhere before departing the mortal coil for Creature Heaven. All we can hope for is that the sequel doesn’t follow suit by laying its own egg. The Doctor was not concerned. Call me crazy, but there is just something about the term “Italo-Sleaze” that inspires me with a wellspring of confidence. 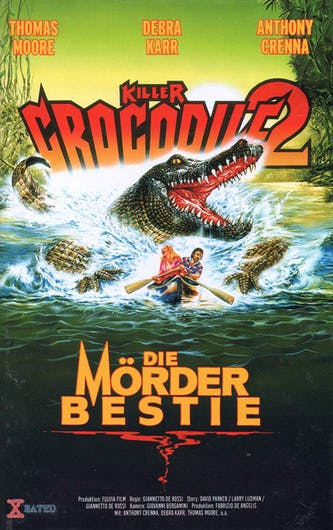 For a little backstory on this highly underrated film “franchise”, you perhaps may want to read my review of Killer Crocodile (1989) which you can find here. The proceedings this time around have moved out of the Bolivian swamp and into a locale that more approximates a giant lake, at least for the time being. It’s best to not ask any logistical questions if you are watching a film titled Killer Crocodile 2. A young man and his babe head out for an afternoon of idyllic windsurfing that begins with this exchange:

Swimsuit Babe: “The trouble is, when I take off my bathing suit, I feel naked.”
Moronic Boyfriend: “Ah, it’s a waste of material.”

Needless to say they do not survive the opening moments, and we are off and running. There is apparently no cure for stupidity amongst other members of the local gentry, some of whom are still dumping toxic waste in the swamp and aren’t afraid to commit murder in order to cover up their nefarious activities, this time under the aegis of a crooked real estate developer named Mr. Baxter. Will these bastards never learn? Don’t they know that the dumping of radioactive waste might lead to ravenous, twenty-foot long crocodiles who are bent on revenge? Apparently not, but then where would crocodile movies be without such idiots? 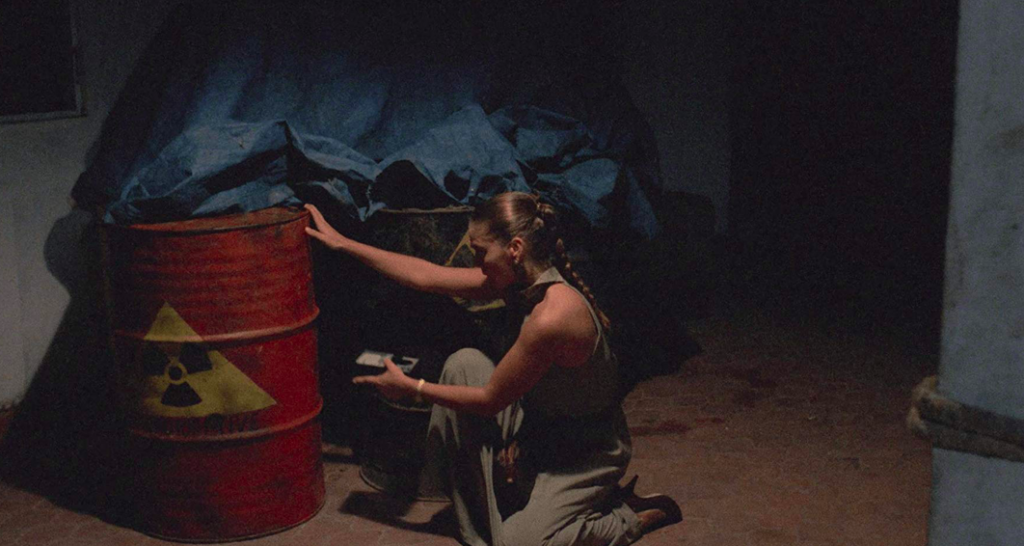 On a positive note, the inclusion of a sexy reporter named Liza (Debra Karr) who is out to investigate said environmental improprieties promises to be a welcome addition

Liza successfully and nonchalantly deals with a would-be car thief, establishing that this vixen has toughness as well as sultry looks. Liza is a hardnosed cookie who is going to get to the bottom of this criminal activity and her Milan fashion model looks shall only add to our enjoyment. The Doctor is well aware of the social dangers involved with objectifying women in today’s day and age, but Liza is stunningly attractive, and the day that I can’t say that is the day I stop drinking tankards of ale while watching crocodile movies. In other words, don’t hold your breath. 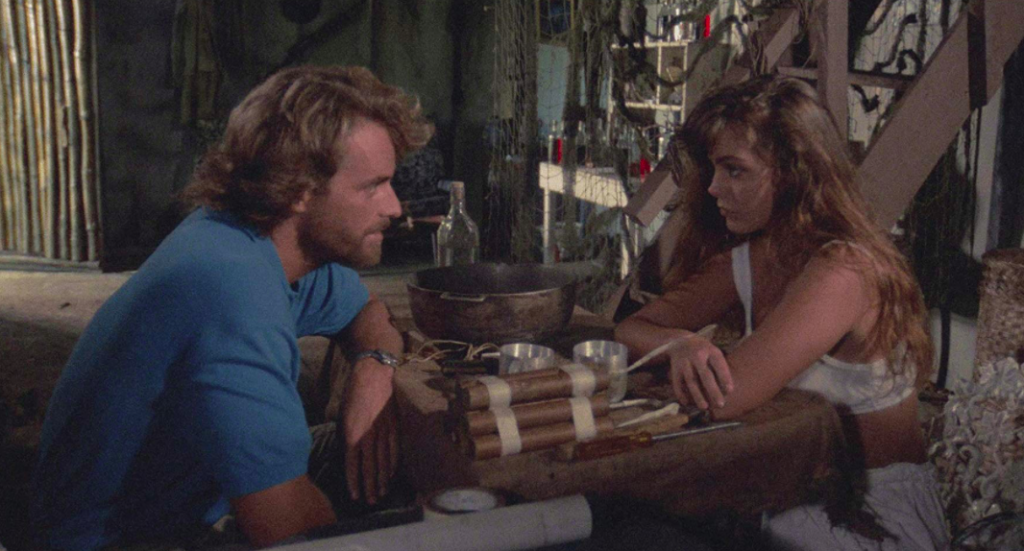 The offspring of Ol’ Tennis Ball Eyes from the first film is pissed off and ready for action, overturning boats and devouring the indigenous locals, including children and nuns. Baby Tennis Balls is roughly the size of a submarine, and we see more of it! In one of the more visually gratifying sequences of Killer Crocodile 2 that doesn’t involve Liza, the crocodile crashes into a wooden shanty of sweaty, drunken polluters of toxic waste and drags the entire thing into the water. 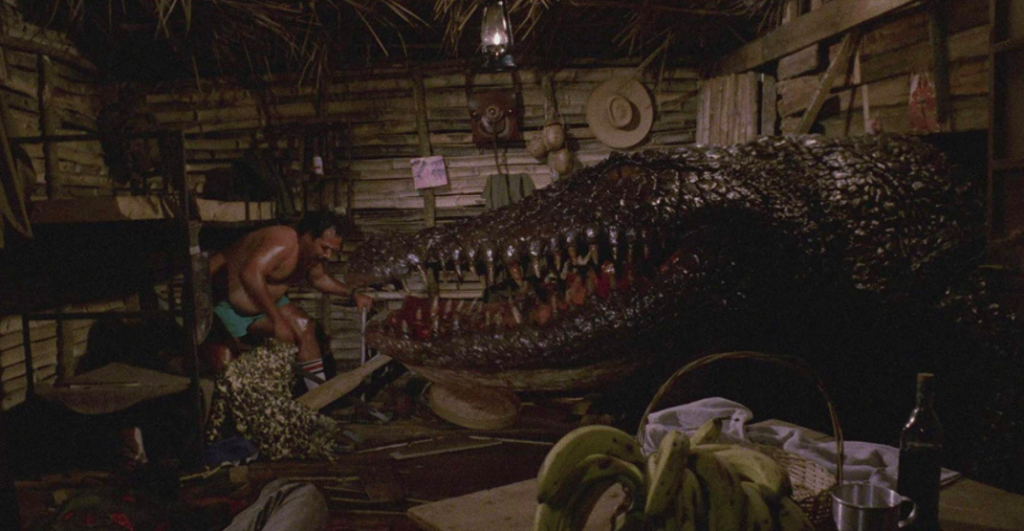 If one picture says a thousand words

There are more scenes of Tennis Balls emerging from the water with its ridiculously oversized head and growling like a polar bear. As I first questioned in my review of the original film, do crocodiles roar like King Kong? The only crocodiles I ever witnessed up close were a pair of Africans at the Dallas Zoo that were so docile from a probable combination of heavy tranquilizers and the Texas summer heat that they remained immobile in my presence. Some queries are best left unanswered.

Richard A. Crenna returns as Kevin, the former environmentalist hippie now turned macho man, complete with a Miami Vice-style wardrobe of white pants and pastel shirts. Kevin is now something of a protégé to the great white hunter Joe (Ennio Girolami) who survived the original film and is now living in a swamp shack and boozing it up on his homemade grain alcohol. Granted, if The Doctor ever ends up living in a thatched swamp hut among the serpents, I will certainly be making my own bathtub booze as well. I sincerely hope to avoid that outcome. Kevin is lucky enough to be personally acquainted with the lovely Liza and becomes concerned when he finds her wrecked boat on the river and believes that trouble is afoot. As he tells Joe, “There’s another one, Joe. Another son of a bitch.” The two of them then go spelunking on the river together. I’m not sure why the entire feature wasn’t centered on the swamp adventures of Kevin and Joe, but alas, I wasn’t involved in the decision making process for some unknown reason. 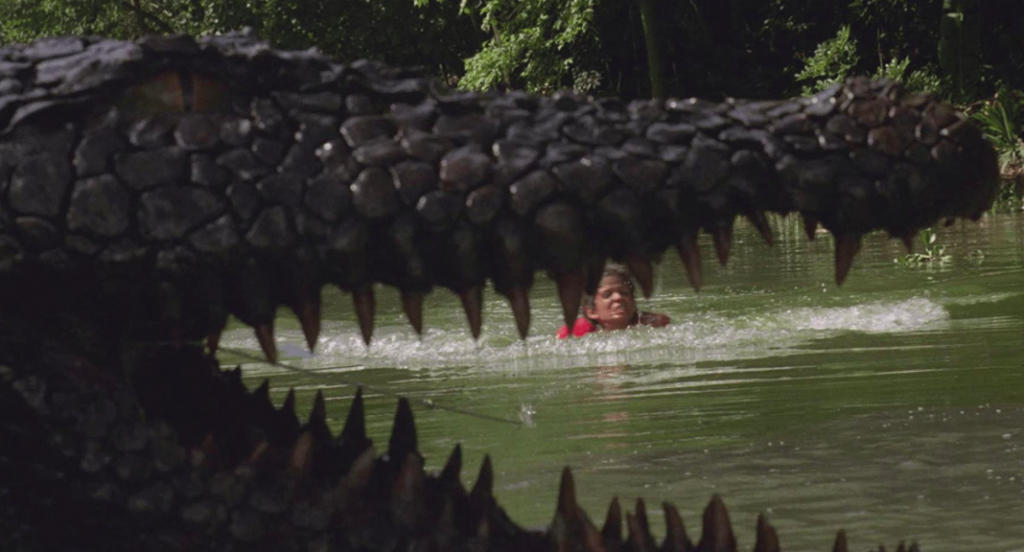 And it’s probably too late for me to spearhead a Killer Crocodile 3 initiative. Or is it…?

Killer Crocodile 2 is another crisply photographed film, proving once again that you do not need the backing of a studio conglomerate to make a decent looking movie. You probably do need the backing of a studio conglomerate if you want anyone to ever see your movie these days, but that is another matter. The jungle/river/swamp locale again makes for enticing and suspenseful scenery. The film has fewer drag spots than its predecessor and the action sequences and the crocodile more than hold their own, especially during another wonderfully crazed finale. I thought the climax of the original film was nutty fun, but this one might exceed it for sheer lunacy. Can you ride a giant crocodile – one that now seems to be roughly the size of a space shuttle – like it’s a swimming park float? 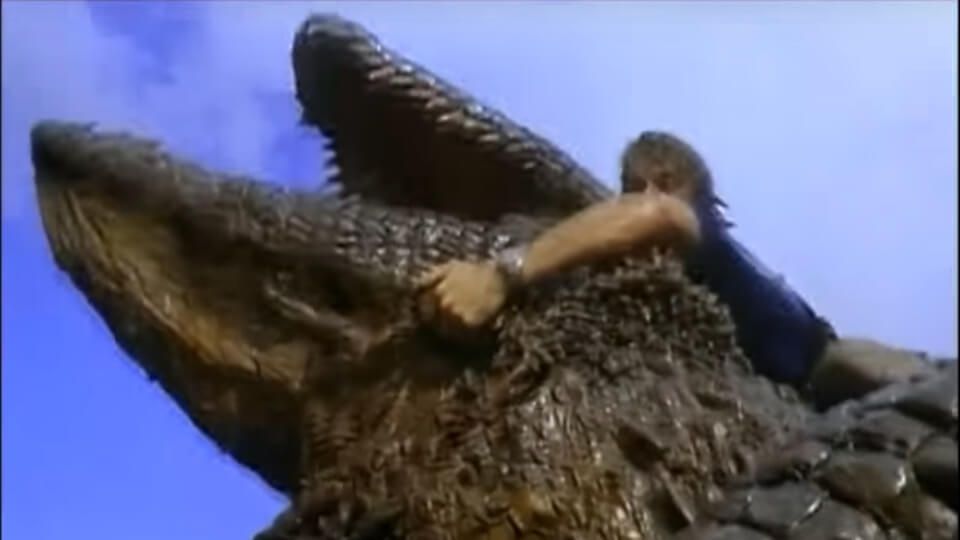 It doesn’t look like it should be recommended as a leisure activity, but I’m glad somebody tried it.

The dubbing, the actual dialogue, the stunts and “visual effects”, and the ridiculous crocodile, one of whose tennis ball eyes appears to have hemorrhaged during the finale and turned a deep red color… Killer Crocodile 2 is exactly what it is supposed to be. As always, my friends, The Doctor wishes you all a clean bill of health.